This past Sunday, I attended day two of ‘AFROPUNK’ Fest in Brooklyn, NY, and it was quite an experience. This was also the first solo trip experience, and I finally faced my fear of going to another state alone. Now, that’s truly an accomplishment because I thought I would never do it, but it wasn’t bad at all. My decision to go on Sunday instead of Saturday was simply because of Raphael Saadiq. That’s it. Legends like him only perform once in a blue moon, and I am sure that I will have more chances to see artists like Solange and SZA. I just didn’t want to miss out on a performance that I knew I was going to regret if I had not been there.

In this review, I will talk about the festival, The Spinthrift Market, The Activism Row, the food, some of the performances I checked out, and if paying for a VIP ticket was really worth it. 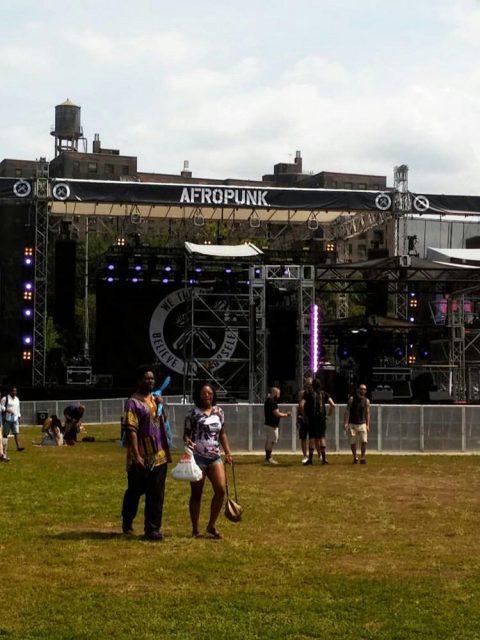 Every single person at that festival was beautiful; it did not matter what you wore, looked like, sounded like; nothing.

A few days before the weekend, AFROPUNK sent out emails and posts through social media of the festival map and updated questions and answers. Their app included the set times of the performers, and the list of all the organizations and businesses that will be in attendance. That was really helpful for planning the day because I knew what type of food I wanted to try, what businesses I wanted to support, and what organizations I wanted to support.

The few activities that were going on: 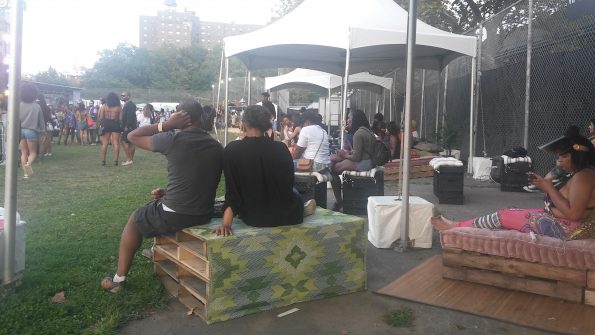 Since I bought a VIP ticket, I had a different entrance to enter the festival than those who had a general admission ticket. I heard on Saturday that many people were in line for hours in both VIP and general admission, but when I got there around 1 pm on Sunday, it was not a problem. I could not find anything online about AFROPUNK’s VIP section, and for those who told me that it wasn’t worth it–never actually gave me any reasons why. So, I just went for it.

Here are the pros and cons of AFROPUNK’s VIP:

Overall, I would not do the VIP option again. The best thing about it for me was the seating area, which should have been included for those who paid general admission. 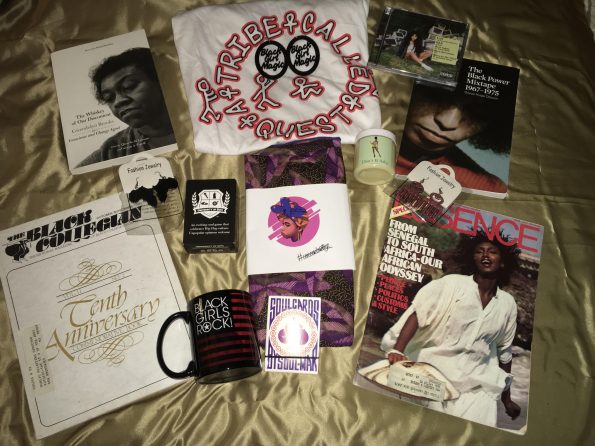 All of the items I purchased there, including a 1978 issue of Essence Magazine, Black Girl Magic Wooden Earrings, and SZA’s CTRL album

I know it looks like a lot, but I promise you I didn’t spend that much. About a month beforehand, I wasn’t sure about going–but in case I decided to go, I needed to save enough money to buy pretty much what I thought was a good investment. Thankfully, I had enough to get what I wanted and not overspend, which could happen easily if you are by yourself. There were so many black-owned businesses, it was amazing. A lot of them like CeeCee’s Closet NYC and Don’t B Ashy are businesses I found out about on Instagram, so I was really excited to buy one of their products, meet the owners in person, and support them.

Here is the list of everything I bought, and where to get it:

Even if you were not at the festival, you can still support all the businesses that attended by downloading the AFROPUNK app.

This was one thing I was anticipating because I was curious to see all of the organizations that fought against racism, oppression, gentrification, drug abuse, and various other issues. Two organizations that I stopped to see was Color of Change and B.A.N. x F.U.R.E.E. (Brooklyn Anti-Gentrification Network x Families United For Racial & Economic Equality. 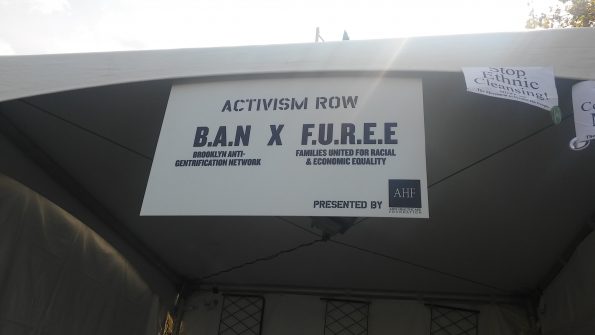 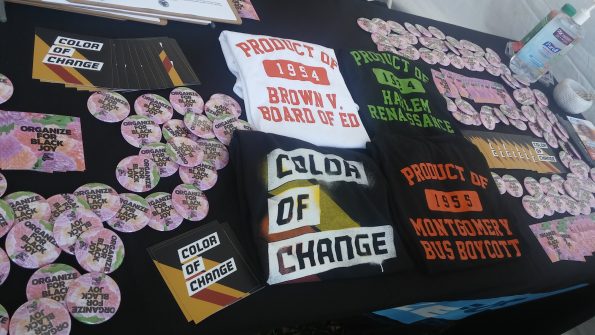 The Color of Change table 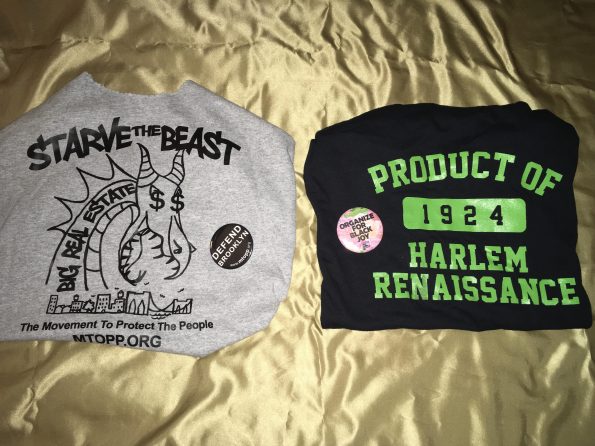 Items from Color Of Change and B.A.N/F.U.R.E.E

If you are in the NY area on September 8th, support the Brooklyn March Against Gentrification, Racism, and Police Violence. Click on the names of the organizations and Brooklyn march for more information. 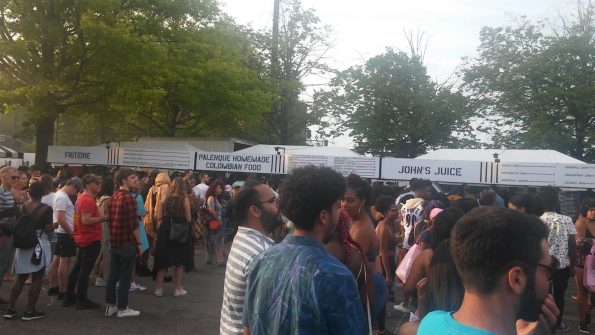 Waiting in line for John’s Juice

There were so many choices for food, you could literally stuff yourself to death if you tried every single thing. However, I only wanted to try food items that I know I will only experience in New York and not anywhere else. There were spots to get fries, steak subs, vegan dishes (the lines were so long for the vegan spots), BBQ, and empanadas. So tempting and so mouth-watering, but I decided on three spots: John’s Juice, A Taste of Africa USA, and the Mac Truck. 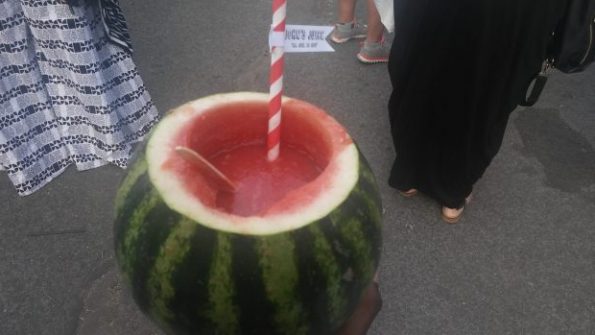 The Watermelon juice came straight from the watermelon itself, and it was so refreshing and healthy. No sugar added, no plastic cups, and it was so heavy to hold. I nearly dropped it trying to take this picture. 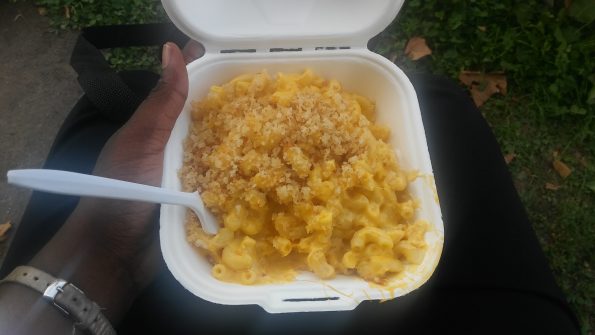 Mac and Cheese with breadcrumbs from the Mac Truck

The mac & cheese was alright, but it blew my stomach up a ton.  That bloat didn’t go away until the next morning. 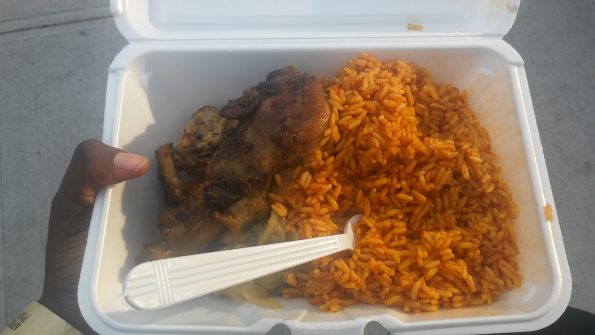 This wasn’t the first time I tried African food (I tried Senegalese and Ethiopian food before), but this was the first time I tried Jollof rice. It was SO GOOD, and the jerk chicken had so much flavor. Now, I need to know where all of the African restaurants are located in Massachusetts because I just have to try this again at home. 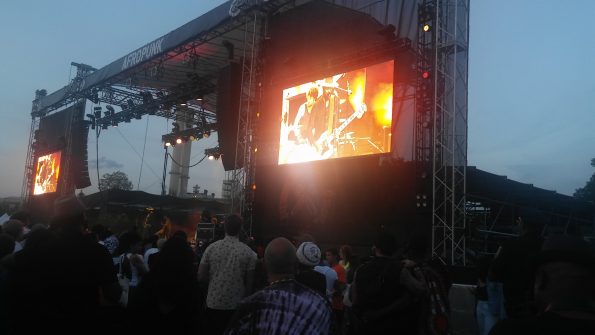 Sunday’s line-up compared to Saturday was a bit unfortunate because I knew more artists performing on Saturday. However, that’s the best thing about a festival is exposing yourself to new music, and discovering new artists to follow. Because I was so distracted by buying food and shopping, I did not spend my time wisely by just taking a break and listening to music. If you attend with other people, it is a lot more fun because your friends will push you to dance and have fun in the moment, but I didn’t get that chance until later that night.

Luckily, I was able to catch performances by Blitz The Ambassador, The 1865, spoken word poet Staceyann Chin, and Gary Clark Jr. The cool thing about the band, The 1865, it was the first punk band I ever heard live, and the audience was jumping frantically and pushing each other for almost all of the songs; I stayed in the background eating African food. What amazed me was even though the “punk” in AFROPUNK was not much represented, those music lovers still had a stage and a place to enjoy that genre and have fun with it.

Spike Lee and the cast of Netflix’s upcoming show, She’s Gotta Have It 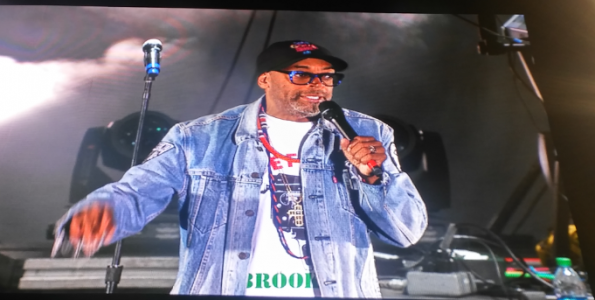 Spike Lee announcing the cast of She’s Gotta Have It

This was a surprise, but not really. A few hours before 9pm on AFROPUNK app, it alerted me that Spike Lee and the cast of the Netflix spin-off series of his classic movie, She’s Gotta Have It, will be on the main (green) stage. However, it never said the time. The thing is, Raphael Saadiq was supposed to began his show at 8:30pm, but nothing happened because I guess something held up Spike Lee and the cast, since they were supposed to enter the stage before Saadiq. I could tell when they announced Mr. Lee, some people in the audience were a little pissed because Saddiq was 30 minutes late. Yet, after he announced all of the members of the cast, including his sister and actress Joie Lee, and premiered the trailer on the screen, everybody was back in good spirits.

Spike Lee and the cast of She’s Gotta Have It

Screenshot of the Netflix trailer for the show

Raphael channeling his look from his Instant Vintage album cover

HIS. SHOW. WAS. AMAZING. The insomnia, the long travel, and the waiting time were all worth it for this show. Plus, I’m embarrassed to say this, but he was extremely attractive in person. I just want to know what skincare and workout regime is to make him look like he’s still 35. Don’t judge me, you would be saying the same thing if you were there.

He performed every song I wanted to sing along to, from “It Never Rains” to “Good Man” to “Skyy, Can You Hear Me,” ‘Still Ray,” Erykah Badu’s “Love of My Life,” D’Angelo’s “Lady” and more.

If you haven’t checked out my Raphael Saadiq playlist, check it out now because almost all of those songs he performed except about 4 of them. It was such a surprise when he brought out Bilal to perform “Soul Sista” because Bilal can sing his butt off. Saadiq’s band featured his nephew, Sir Dylan, Erika Jerry (who brought so much Black Girl Magic with her), and singer Charles Jones.

One of the funniest moments that happened in the audience was when the band began playing “Cranes In The Sky” and so many people gasp as if they had no idea he was involved with Solange’s album. I was already hip to it, but I was glad to witness the reactions of the audience and Saadiq.

AFROPUNK Fest was a great experience that was extremely needed at this time of stress, societal pressures, and political mayhem. Although it was only one day, it was the perfect getaway to feel proud and excited to be a black person.

Go on my Instagram @therinacollective and @serinagousby to see more pictures and videos of the day.

Why I Adore Raphael Saadiq And His Artistry

10 R&B Love Songs You Can Relax To

My ‘CurlFest 2018’ Weekend With My Best Friend

8 Songs That Are Good For The Soul

Thank you for this write up! I was wondering if I should go to Afropunk alone by myself and I stumbled across your site. Glad you had a good time 🙂

Thank you for this write-up. I was thinking about going and was not sure if I should get VIP or not. This helped me to decide. I am glad that you had fun It was very helpful to read about your experience 😀

I was happy to had stumbled across this yesterday. I am also planning my first solo trip, first AfroPunk this year so this put me more at ease. Were you only there for the day? If you stayed for the weekend, do you have any advice for navigating in Brooklyn and what to see? I would appreciate any extra advice. Thanks!

This is awesome! Great info before I go this year.