It was just about a year ago when I decided to face my traveling fears by going to AfroPunk Brooklyn by myself—just to experience solo travel for the first time. Now a year later, I felt the need to solo travel back to Brooklyn, and experience the 8th Annual Brooklyn Loves Michael Jackson Block Party, hosted by Spike Lee.

This event was incredibly important for me because for one, I am a huge Michael Jackson fan (always have been since I was little), this year on August 29th marked his 60th birthday, and this was my first time surrounding myself with other people who love him just as much as I do. For someone who has once been teased and bullied for publicly emphasizing my fandom and admiration for Michael, it felt amazing to go to an event to celebrate him—with no judgment at all.

Since I was traveling from Boston and the party started at 12pm, I caught the 6am New York bus to give myself enough time to relax in the city before I headed to Brooklyn. I arrived in the city at about 10:15am, and walked to a nearby coffee shop. One thing that I regretted during my AfroPunk trip was that I had no time at all to visit another spot in the city other than the actual event. This marks my 6th trip to New York, so I’m beginning to familiarize myself with the busy atmosphere, and not feel so much like a tourist. Around 11am, I took an Uber all the way to Do The Right Thing Way, the first street name to be named after a work of art, located in Bed Stuy, Brooklyn. 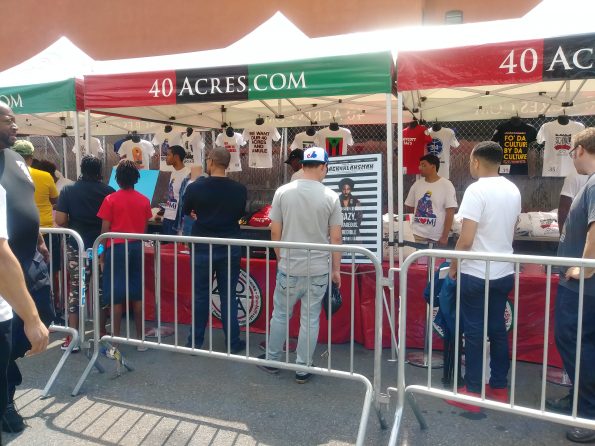 I was excited that I arrived to the party minutes just before 12:30pm, because I wanted to beat the huge crowd coming in, as well as the long line to purchase Spike Lee’s merchandise items. He had so many shirts, hats, and accessories that either had a quote or picture symbolizing some of his classic movies. I ended up purchasing a Moleskine plain notebook that commemorates the 30th Anniversary of the first Spike Lee Joint, She’s Gotta Have It. A picture of the character “Nola Darling”, played by Tracy Camilla Johns, is on the front cover in pink. Because I already have a ton of notebooks, I may save it to write stories or any film ideas that may pop at me. As for clothing, I bought this year’s BK Loves MJ shirt, which shows Michael (probably in the Bad era) wearing a Notorious B.I.G. inspired sweater, and a crown on his head. Beautiful design.

As I was in line to purchase the items, I ended up having a nice conversation with one of the crew members of the event. It was funny because initially he thought I was a local until I told him about my job at GrubStreet, and I loved it because I felt like I fit in to this community. As the conversation went further, he asked me if I was going to take a picture with Spike Lee, and I had no idea that the line was leading up to him. I know the crew member could tell I was a bit nervous because I didn’t really give him an answer, but his kind words gave me the courage to ask Mr. Lee for a picture. I’m usually the type to be satisfied on simply meeting people and having that memory alone without a picture to prove that it happened, but I’m grateful that I have a picture with the legend. In addition, Spike Lee signed my BK for MJ poster, which I managed not to bend or destroy on my way back to Boston, so hopefully I can frame it soon.

Stop by the different booths today at #BKlovesMJ Register to vote, grab a Vita Coco, take the kids to the Kid’z Zone, pick up some merchandise at Spike’s Joint or head to the health truck.

After leaving from that section, I decided to walk around since the official party did not start yet, and Jackson 5 music was playing to warm us up. There were a few stations that were set up; a table with The Lawyers’ Committee for Civil Rights Under Law—where you can register to vote, a children’s section where young people can get their face painted and play activities, and Vita Coco was giving out free coconut water. Eventually I walked up on Do The Right Thing Way, and saw a few local artists and entrepreneurs selling their art, MJ inspired shirts, and customized buttons. The artist who painted such amazing art is Jocelyn M. Goode, also known as @extraordinarie1 on social media. Definitely check her art out. I was so close to getting a painting but I knew that it would not make it back to Boston undamaged.

Around 1:30pm, the party officially started, and I was able to stand right at the front of the stage to see everything. Spike Lee and Anthony Ramos, who stars in Spike Lee’s Netflix series, She’s Gotta Have It, playing Mars, hosted the block party. The legendary DJ Spinna was in charge of playing all the music, and it was so fun. All the Michael Jackson hits that you can think of, we were definitely dancing and singing along to. Here are just a few moments that happened:

I had such a great time at the Block party on that hot sunny day, and it was such a safe and welcoming environment for a solo traveler. I am definitely planning to go next year, and if you are a Michael fan, I encourage you to come. Last week was the first time I had a long break from working and battling with stress, so this day-long getaway was perfect for me to forget about everything just for a day. Spike Lee also hosts a block party for Prince every year in June, which I hope I can make it next year, and probably bring someone with me. Solo or with a friend, nothing will stop me from experiencing these moments.

Long live the King of Pop, and I thank him for bringing me joy and laughter through his artistry all my life. Shamone.

The ‘Well-Read Black Girl’ Festival Was Everything I Needed in...

My ‘CurlFest 2018’ Weekend With My Best Friend

This was a wonderful read and encouraging. Because I really want to go to his Do the right thing block party. Are you going would love to link. If not it’s solo for me as well.