Pioneer Poet Phillis Wheatley Should Not Be Overlooked

Thursday  morning, I decided to visit a Boston burying ground that is rumored to have a poet that I’ve always been curious about, buried there. It probably wasn’t the best idea to go there when it was pouring rain and snow, but for months now, I really wanted to know if this author had a marked grave. Unfortunately, I couldn’t find her, the information plaques that were around the burying ground did not say one thing about her, and I felt very lost at that moment. For Phillis Wheatley to be the pioneer of Black literature, publish her first and only book when she was around 20 years old, and was known as the most famous “negro” at the time of 1773, it’s devastating that her memory and legacy is slightly overlooked.

The first time I heard about Phillis Wheatley was either my sophomore or freshman year of college. I know that I was searching on Google for Black poets that were from Boston, and she was one of the first that popped up. If you don’t know, Wheatley is the first African-American poet to ever publish a book back in 1773. She is also the first African-American author to publish a book. The craziest thing is the fact that she was enslaved while all of this happened. According to the book, Phillis Wheatley: Biography of a Genius in Bondage by Vincent Carretta, she was brought to Boston when she was 7 or 8 years old, along with 70+ survived African people in a slave ship, ironically called Phillis. John and Susanna Wheatley bought her soon after, and 12 years later she became a published author. Back in college, I wasn’t able to spend time on researching her as much due to my hectic schedule, but now I’m fully committed to figuring out this author and learn as much of her life as I can. 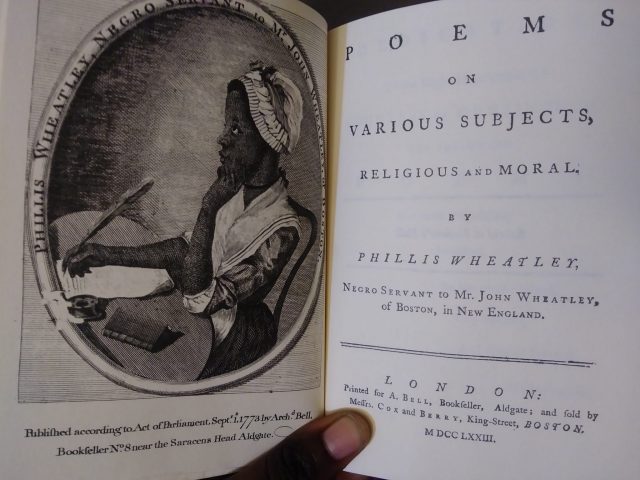 Snapshot of her poetry book, Poems On Various Subjects, Religious and Moral

Sadly, she does remain a mystery in a lot of ways, but Thursday hit me very hard. It is said in multiple sources that Phillis was poor at the time of her death, and a free woman. All day I kept wondering how Alice Walker found Zora Neale Hurston’s grave that wasn’t marked. Is there a way I can do the same thing for Phillis? Although she has a beautiful monument around Commonwealth Avenue in Boston, as a part of the Boston Women’s Memorial, it’s not enough. I also find it sad that no one from the 1800s or 1900s tried to find it, while the wording of the headstones may have been more readable, unless her burial had no words to begin with.

For those who watched Spike Lee’s Netflix series, She’s Gotta Have It, do you remember the scene when Nola Darling visited the Greenwood cemetery in Brooklyn, and set a rose for each notable artist like James Baldwin, Miles Davis, and Duke Ellington? I was really hoping to do that for her.

More questions that I want answers to are, “why did some critics allegedly say she was not “black enough”? “Why didn’t she stay in England when her book got published?” “How in the world was she able to survive as a child in a slave ship?” I know that I will not find all of these answers, but I do want people to start talking about her, especially those who are writers and poets of color. In the year of 2018, which is about 245 years later after Wheatley’s book Poems on Various Subjects, Religious and Moral, was published, I think it’s time to dig into this poet and truly honor her in the way that she hasn’t been honored before. 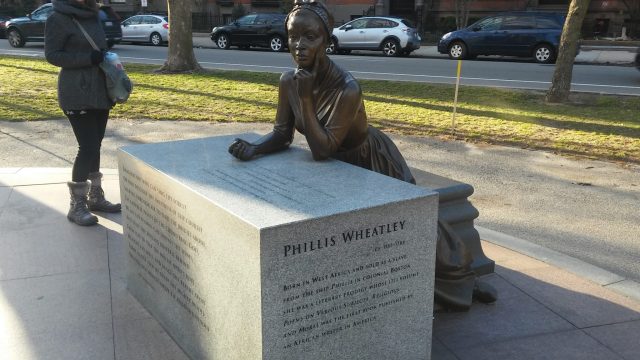 Her monument at the Boston Women’s Memorial

In doing that, my first step is to read. I currently own three books regarding her, which are The Collected Works of Phillis Wheatley, edited by John Shields, the biography I mentioned above by author Vincent Carretta, and Wheatley’s full-length book, Poems on Various Subjects, Religious and Moral. Another book that I’m currently waiting to arrive in Henry Louis Gates’ The Trials of Phillis Wheatley: America’s First Black Poet and Her Encounters with the Founding Fathers. Sporadically throughout this year, I will be documenting my discoveries and reflections on Phillis Wheatley, and hope to teach others about this poet who opened the doors for Maya Angelou, Nikki Giovanni, Lucille Clifton, Eve L. Ewing, and many other authors to be taken seriously as a poet.

I also want to present this challenge to you. If you would like to, research on some notable figures that are from your hometown or state, and who were in the same career as you. Please keep the pioneers of the past in mind, for they are the reason you have a higher possibility of achieving your dreams.

Finding a Balance in Work and Writing

If You Have A Dream, Make It Real

The ‘Well-Read Black Girl’ Festival Was Everything I Needed in...

What I Learned From My First Year of Blogging

Songs That Crushed My Writer’s Block This Week

My Art Has Always Been My Purpose