As a woman with dark skin, 4C-textured hair, and goals to accomplish, I needed an album like Ari Lennox’s Shea Butter Baby. The overall feel for this album is so smooth, sensual, and the perfect debut for Dreamville’s First Lady. I feel sexy and empowered while hearing it, and I’m grateful that I was able to hear some of the songs live.

On June 5th, I attended Ari Lennox’s “Shea Butter Baby” Tour at Sonia in Cambridge, Massachusetts. I remember the day she announced the tour in March; I bought my ticket with no hesitation and managed to get a meet and greet pass, about an hour before all the tickets sold out. I arrived about 45 minutes before the doors opened, and those with meet and greet lanyards got the advantage to head into the venue before the general public. 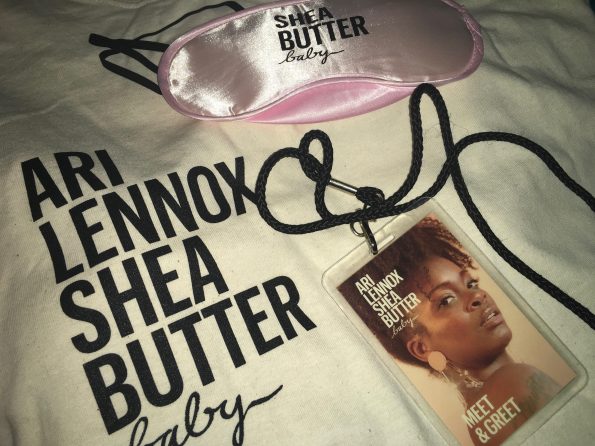 Merchandise from the tour. The Eye Mask and autographed 8×10 (not pictured) were meet and greet items.

The three openers for the tour were great choices, especially for those who enjoy soulful R&B music. The first one was Ron Gilmore Jr., who is an amazing keyboardist and has worked with artists such as J. Cole, Lauryn Hill, and most recently with Ari Lennox on her album. He set the tone for the night by burning sage and engaging with the crowd—humorously asking if he was in Boston or Cambridge. He sang a few songs, including a new record called “The Free”, which is out on June 10th. In honor of our location, he played Roxbury’s own New Edition’s “Can You Stand The Rain” on the keys. 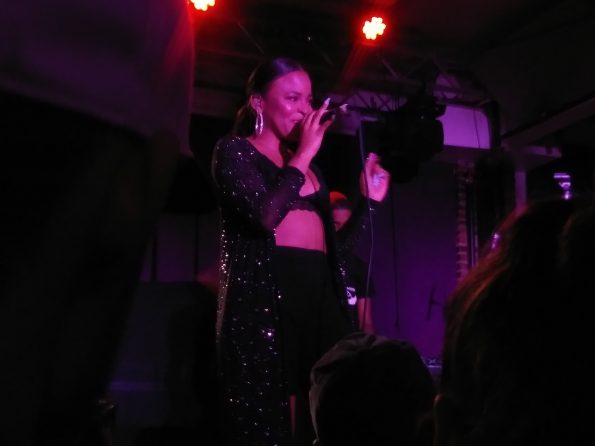 The second opener was Mikhala Jené, who was my favorite out of the three. She started her set with “All I Want” from her 2018 EP, Carolina Blues. It sounds so beautiful live. I immediately became a fan and saved her EP on Tidal to listen later. She also performed “The Annunciation”, in which speaks on a dream God gave her, and her musical journey. The lyrics are so real and set an even more peaceful tone to the show. The last opener was Baby Rose. It took a while for the audience to feel for her music, but I enjoyed her song “Borderline.” I understand being an opener on a tour is tough at times, especially when most of the audience only wants to hear the headliner, so I give so much love to these artists for sharing their artistry on that platform. 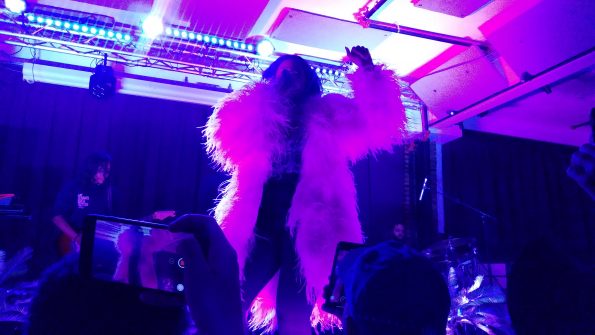 Then, Ari arrives. A few days back, I saw clips of her performing “Chicago Boy,” and the live guitar chords, drums, and keys made that song so much more special. Since then, I was hoping she would begin her performance with that song, and she did; arriving on stage with a faux fur coat, natural hair, black jeans, and a snakeskin crop top. Her stage set up in the background had four wig heads with different wigs, a palm plant, and a faux fur chair. It was such an experience to hear that song live. I was standing at a great spot in the audience, close enough for her to see me when she was looking directly at the audience throughout the show.

Sadly, J. Cole didn’t come out and surprise everyone as he did in the New York show the night before. “Shea Butter Baby” was a great performance regardless.

The most favorited performances were “Static,” “Broke,” and “BMO.” Ari opened up about her anxiety, the meaning behind “Static,” and gave encouraging words on the temporary emotions and effects of mental health disorders. I listen to that song differently now, and I’m proud of her for being courageous to open up about mental health in the audience. It was needed, and I’m sure it helped many who experience anxiety as well. I’m still waiting on a video for “Broke” with JID to come out because it’s such a great summer record. Additionally, she saved “BMO” and “Backseat” for last, after jokingly telling us that she couldn’t perform them.

She also performed a few songs from her 2016 EP, PHO, and singles like “40 Shades of Choke”. My highlight of the night was when she shouted out dark-skinned “chocolate” women in the audience. She made it very clear that her album is for these women, who are often overlooked, disrespected, and unappreciated. I felt seen and honored when she made her unapologetic statement, and with this album, I’m even more proud to wear the skin I’m in. 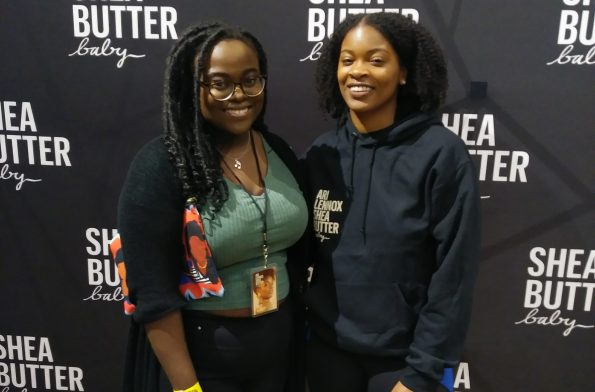 Me and Ari Lennox

At the end of the show, it was time for the meet and greet, and I have to say…she’s a sweetheart. I wasn’t nervous actually; I was sure she had a kind spirit, and I was right. I was more afraid of the time I would be given, and to my surprise, I didn’t feel rushed. She hugged me twice, when we met and before I left, she complimented my faux locs, and I had time to ask her a question. I asked, “What songs on the album [Shea Butter Baby] took the most time to perfect?” She told me, as we were posing for the photo, both “Whipped Cream” and “Static.” Before the show, I noticed pictures from her other meet and greets, with many people giving her things. For a moment, I thought about making her a card out of my calligraphy, but I didn’t have time to create it. So, I decided to ask her a question.

Since I’m turning 25 on June 27th, I’m pretty much celebrating all month, and I’m grateful to start June off with Ari Lennox. I needed a dose of Black girl magic, soul, and peace at a live show, and this tour exceeded my expectations.

I Describe My Music Taste With These Seven Songs

Songs That Remind Me Of My Childhood

10 R&B Love Songs You Can Relax To

How Prince Got His Freedom With an Unpronounceable Symbol