Why I Love Spoken Word Poetry

There’s one thing to write a poem and put it on a page for people to read. It’s another thing to perform that exact poem and connect with an audience. Spoken word poetry is a skill that not many poets have, but should have. The art form is a great way to encourage others who aren’t poetry reading fans, and get them to see poetry in a different light. When I performed a poem for the first time in high school, I had no idea how to perform. I was told to memorize my work, but no one actually showed me how to bring those words to life. It’s all about eye contact, movement, animation, attitude, and I’m still learning.

A few years later as a freshman in college, I was in a Black Studies class, and all semester we had to prepare a 10-page analytical essay on a topic that we were passionate about. My topic was on poets during the Black Arts Movement (1965-1975). This paper was incredibly hard to write, but my favorite assignment of my college career because not only was I introduced to poets I never heard about, but I also visited the Schomburg Center for Research in Black Culture in Harlem, NY. Every single piece of evidence I needed for my paper was found in that center, since there wasn’t much on The Black Arts Movement online at the time. I eventually learned about poets Amiri Baraka (who started the movement along with Larry Neal), Sonia Sanchez, June Jordan, Gil Scott Heron, Nikki Giovanni, Maya Angelou, and many others. After the assassination of Malcolm X, black creatives used their talents to speak politically, act as strong activists, and use poetry to honor Malcolm’s legacy.

My research and hard work on that assignment encouraged me to look even further into spoken word, and I want to share the books, poems, and artists who has contributed to my growth as a poet.

I found this poem on Youtube back when I writing my paper on the Black Arts Movement, and realized that it was actually in my favorite poem anthology, The Black Poets. This is the type of poem that I hope to achieve on writing because it has so much animation and visual imagery, that is so entertaining to hear from Mr. Baraka’s mouth.

Gil Scott Heron was the first person I looked up when I first heard about spoken word. Although we all know his most popular poem, “The Revolution Will Not Be Televised”, I thought it was important to show you a different piece that tells a powerful message.

Youtube is heaven sent because it introduced me to Def Poetry Jam. This particular piece is my absolute favorite because he made me want to fall in love with somebody after his performance. He showed great confidence, passion, and so much movement in his performance. You know a poet is talented when their words has the power to inspire and effect the audience on a topic they’re passionate about. Fortunately, I was able get all seasons of Def Poetry Jam on dvd, so I get to watch this and other poets frequently.

Fun Fact: I got to open up for Def Poetry Jam alum and Apollo Winner, Oveous Maximus back in 2013 at my alma mater’s Black Student Union Poetry Show. 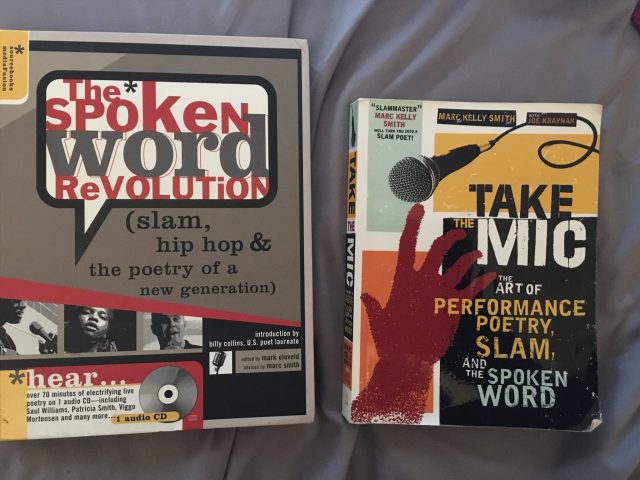 During my senior year of high school, I purchased the book, Take the Mic: The Art of Performance Poetry, Slam, and the Spoken Word by Marc Kelly Smith. At the time, I was a part of a writing program called EmersonWrites at Emerson College, and I had the opportunity to perform with a team of poets at the Louder Than A Bomb event at MIT in Cambridge. Unfortunately, I fell ill that weekend and I couldn’t perform, but this book helped me prepare and educate me on techniques and skills that slam poets possess. Even today, I still use it as a reference.

Another book on Spoken word is called The Spoken Word Revolution (Slam, Hip Hop & the poetry of a new generation), edited by Mark Eleveld and advised by Marc Smith. Marc Smith is the founder of slam poetry. I found out about this book last year actually, and it contains an audio CD featuring over an hour of poetry. The book has poetry from artists Saul Williams, Beau Sia, Taylor Mali, DJ Renegade, Billy Collins, and Regie Gibson. Speaking on Regie Gibson, did you know that we was the writer of this iconic poem below from the movie, Love Jones?

Love Jones, starring Larenz Tate and Nia Long, was the first time I saw spoken word poetry be presented in a movie. The setting of the Chicago club was incredibly different than Def Poetry Jam; it was more soothing and relaxing. I still have yet to conquer my fears and perform at a nearby cafe or pub that hosts poetry open-mics, but we’ll see. Not only was Regie Gibson the poet behind “Brother To The Night (A Blues For Nina)”, but Sonia Sanchez was the poet behind Nia Long’s character, Nina’s poem — “I Am Looking At Music.” Listen below:

A few years ago, Arsenio Hall brought back his late night show after more than 20 years since his late night show back in the early 90s. I was an avid watcher until it unfortunately got canceled, but I remember him having poets perform on the show. This performance stood out the most for me because this was first time I felt like I could one day see myself on television and inspire people all over the world. I love Ernestine’s poem and the message because it’s a shame that Black women are continuously being labeled and assumed to have these negative stereotypes. I was so happy to see her Black Girl Magic shine in this performance.

Poetry comes with the words, and spoken word is all about the voice. I love performing when I get the chance to, which you can watch on my posts about natural hair and Black Girl Magic. Do you have any favorite spoken words artists, groups, or events that happen in your area? Let me know.

What My Mother’s AncestryDNA Results Taught Me

I Never Experienced A Love Life

It Feels So Good To Be A Writer

Pioneer Poet Phillis Wheatley Should Not Be Overlooked